My short story The Whale is part of the Zombies Need Brains' WERE:-- anthology. No werewolves allowed! So if you have a thing for shapeshifters but don't want to risk encountering yet another werewolf tale, this is the anthology for you. 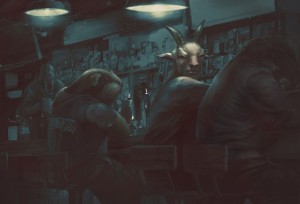 Available at Amazon, among other places.

Back Cover Copy: Werewolves rule the night in urban fantasy, but everyone knows there are other were-creatures out there just as dangerous and deadly, if not as common, each with their own issues as they struggle to fit into—or prey upon—society. What about the were-goats? The were-crows and were-wasps? Here are seventeen stories of urban fantasy by today’s leading science fiction and fantasy authors that introduce you to some of those other were-creatures, the ones hiding in the dark background shadows, waiting to bite. Join us as they take you into the hidden corners of our world to see some lesser known were-creatures. You may want to bring along some silver . . . just in case.