I have pinned all my hopes and dreams on July, and here's why. My phrase to sum up 2015, ever since February when my dog died and my cat got sick, has been "this terrible f***ing year". And it has only gotten worse. Like a book plot, it is the steady progression of bad to worse, only this is real life so there's no guarantee of a well-resolved ending. Ongoing family upheaval and dog death x3 being the worst in a long line. But even though the phrase to sum up 2015 is unchanged, though now in all caps, I've started correcting myself when it comes up. Because we're only halfway through the year, and I don't want to label the next six months. Just in case they're still undecided about whether or not they want to screw with me. Along with changing my phrasing to "those terrible last six months", I've also been trying to think of all the bad things that have happened as change, which I choose to label as bad. I'm still working on believing that one. Especially when change comes in the guise of villains with twirly mustaches. "There is nothing either good or bad, but thinking makes it so." 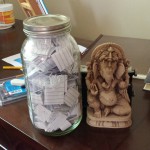 I find it ironic that this was the year I started keeping a 'happy things' jar. I have dutifully recorded the happiest moments of my day for six months now, even when the happiest thing was the day being over. And I've noticed that on the hard days, when change occurred that I didn't want, the happy moments stood out stronger than on the days when I was generally okay or at peace. Don't get me wrong, those are my preferred days, but it reminded me that contrast is an important part of appreciating life. So, I am entering July with the expectation that the next six months could hold all matter of wonderful things. In the spirit of new beginnings, I'll be changing out my writing journal a bit prematurely. 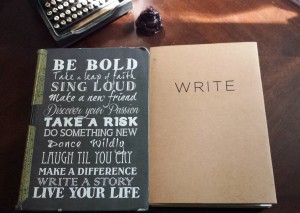 (I've been giddy about this for a couple days now.)